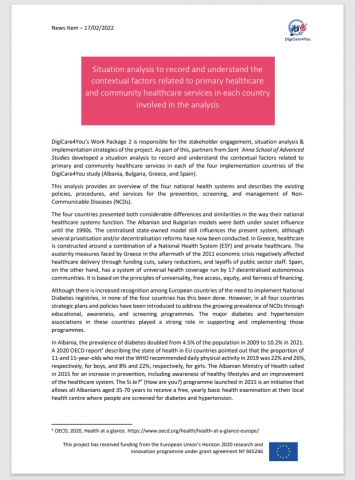 DigiCare4You’s Work Package 2 is responsible for the stakeholder engagement, situation analysis & implementation strategies of the project. As part of this, partners from Sant ´Anna School of Advanced Studies developed a situation analysis to record and understand the contextual factors related to primary and community healthcare services in each of the four implementation countries of the DigiCare4You study (Albania, Bulgaria, Greece, and Spain).

This analysis provides an overview of the four national health systems and describes the existing policies, procedures, and services for the prevention, screening, and management of Non-Communicable Diseases (NCDs).

The four countries presented both considerable differences and similarities in the way their national healthcare systems function. The Albanian and Bulgarian models were both under soviet influence until the 1990s. The centralised state-owned model still influences the present system, although several privatisation and/or decentralisation reforms have now been conducted. In Greece, healthcare is constructed around a combination of a National Health System (ESY) and private healthcare. The austerity measures faced by Greece in the aftermath of the 2011 economic crisis negatively affected healthcare delivery through funding cuts, salary reductions, and layoffs of public sector staff. Spain, on the other hand, has a system of universal health coverage run by 17 decentralised autonomous communities. It is based on the principles of universality, free access, equity, and fairness of financing.

Although there is increased recognition among European countries of the need to implement National Diabetes registries, in none of the four countries has this been done. However, in all four countries strategic plans and policies have been introduced to address the growing prevalence of NCDs through educational, awareness, and screening programmes. The major diabetes and hypertension associations in these countries played a strong role in supporting and implementing those programmes.

In Albania, the prevalence of diabetes doubled from 4.5% of the population in 2009 to 10.2% in 2021. A 2020 OECD report[1] describing the state of health in EU countries pointed out that the proportion of 11-and 15-year-olds who met the WHO recommended daily physical activity in 2019 was 22% and 26%, respectively, for boys, and 8% and 22%, respectively, for girls. The Albanian Ministry of Health called in 2015 for an increase in prevention, including awareness of healthy lifestyles and an improvement of the healthcare system. The Si Je?” (How are you?) programme launched in 2015 is an initiative that allows all Albanians aged 35-70 years to receive a free, yearly basic health examination at their local health centre where people are screened for diabetes and hypertension.

Bulgaria recorded the lowest life expectancy in the EU in 2019, reflecting the prevalence of many risk factors such as smoking, alcohol consumption, and poor diet. The prevalence of diabetes in Bulgaria amounts to 7.4% of the adult population. Childhood obesity is another cause of concern in Bulgaria, with one in five children being overweight or obese. The Ministry of Health launched a National Programme for the Prevention of Non-Communicable Diseases in 2014 with the aim of promoting the population´s health and reducing the prevalence of NCDs through early screening and the promotion of healthy lifestyles.

The Greek population has a high life expectancy at birth, but it has declined during the past decade. Deaths related to NCDs such as cardiovascular diseases, diabetes, cancers, respiratory and kidney diseases have increased as diabetes prevalence also increased from 5.1% in 2011 to 6.4% in 2021. A complete national plan for the prevention and management of T2D was established in 2012. The National Action Plan for the Prevention and Treatment of Diabetes Mellitus and its complications contains suggestions about how to lead a healthy life, with the global objective of informing the general public on the risks of T2D. In 2021, the Hellenic Diabetes Association published a document to guide healthcare professionals (HCPs) in managing T2D. The Hellenic Society of Hypertension translated the international guidelines for the management of HTN.

The burden of chronic diseases such as diabetes has increased significantly in Spain over the last decades with over 10% of the population living with diabetes, adding pressure on the healthcare system. A national diabetes plan has been in place since 2007. The plan provides general guidelines to stimulate the implementation of regional programmes for prevention, early diagnosis, and efficient treatment of diabetes. In 2012, the national Government supported a novel programme – Diabetes Strategy of the National System of Health. The overall objective of the project was to reduce the incidence of Type 2 Diabetes by improving screening, prevention, and management processes and to enhance the quality of life of those people living with diabetes, by tailoring health services.

The current burden of NCDs in the four implementation countries, coupled with those countries’ recent shift in focus towards disease prevention and the promotion of healthy lifestyles, underlines the relevance of solutions such as DigiCare4You.