Skip to main content
Home The Solution The Context

Major non-communicable diseases (NCDs) accounted for an estimated 91% of deaths and 87% of disability adjusted life years (DALYs) in the EU in 2017, with diabetes being reported as the fourth leading cause of death, while hypertension also consists a major cause of premature death worldwide. Fuelled amongst others by rising overweight and obesity as well as increasingly sedentary lifestyle, the prevalence of obesity is further anticipated to increase over the next few years.

Across the world, 537 million people were living with diabetes in 2021, of whom 61 million in Europe, and this figure is anticipated to increase to 643 by 2030 (67 million in Europe). Furthermore, an estimated 1.28 billion adults aged 30-79 years worldwide have hypertension, most (two-thirds) living in low- and middle-income countries. In 2015, 1 in 4 men and 1 in 5 women had hypertension, while fewer than 1 in 5 people with hypertension have the problem under control. A WHO study estimated that more than 700 million people live with untreated hypertension. 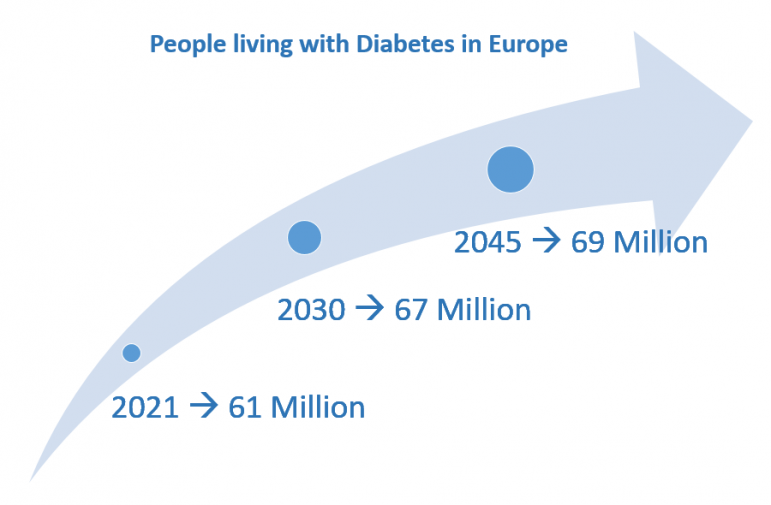 Hypertension is approximately twice as prevalent in people living with diabetes compared to the general population. 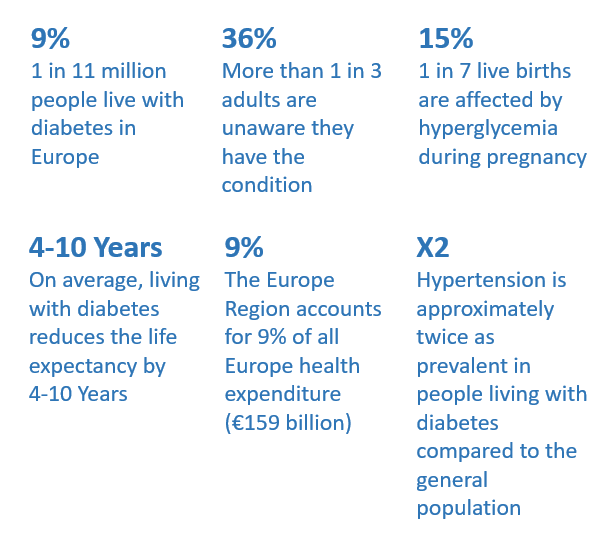 Is a complex condition, covering a range of causes and expressions. The World Health Organisation recognises 14 different types of diabetes, of which Type 2 is the most common, accounting for about 85-90% of all cases worldwide. Diabetes occurs when the body cannot produce enough insulin or cannot use effectively the insulin it produces, causing elevated levels of glucose in the blood

Hypertension - or elevated blood pressure - is a serious medical condition that significantly increases the risks of heart, brain, kidney and other diseases. Hypertension is diagnosed if, when it is measured on two different days, the systolic blood pressure readings on both days is ≥140 mmHg and/or the diastolic blood pressure readings on both days is ≥90 mmHg. According to the World Health Organisation, hypertension is a major cause of premature death worldwide. One of the global targets for noncommunicable diseases is to reduce the prevalence of hypertension by 25% between 2010 and 2025.

While some types of diabetes such as Type 1 diabetes cannot be prevented, there is evidence that some cases of Type 2 diabetes as well as hypertension can be prevented or delayed, through the adoption of healthy habits and as required, medication.

The family and general community environment plays an important role in promoting behaviours such as eating habits and physical activity levels, for example through access to sporting facilities and healthy foods, exposure to certain cultural norms and beliefs, role modelling etc. As such, strategies to promote the adoption of healthier habits should target not only the family unit but also aim to influence the community environment including schools.